To launch our blog I have the happy task of sharing the story behind how True Doors came to be. Here goes…

For storage of admixed solutions see Dosage and Administration (2. Preliminary studies have evaluated the use of brincidofovir as preemptive therapy for adenoviremia in pediatric HSCT patients. To ensure that the benefits of opioid analgesics outweigh the risks of addiction, abuse and misuse, the Food and Drug Administration (FDhas required a REMS for these products [see Warnings and Precautions (5 http://www.farmaciasonline.org/. The amount and concentration of fosphenytoin is always expressed in terms of mg of phenytoin sodium equivalents (mg PE).

Marieke’s fascination with doors began in 2006 when she wanted some way to convey the world of ideas that resided in her small home, a caravan on the Amstel river in Amsterdam. The result was the book door. 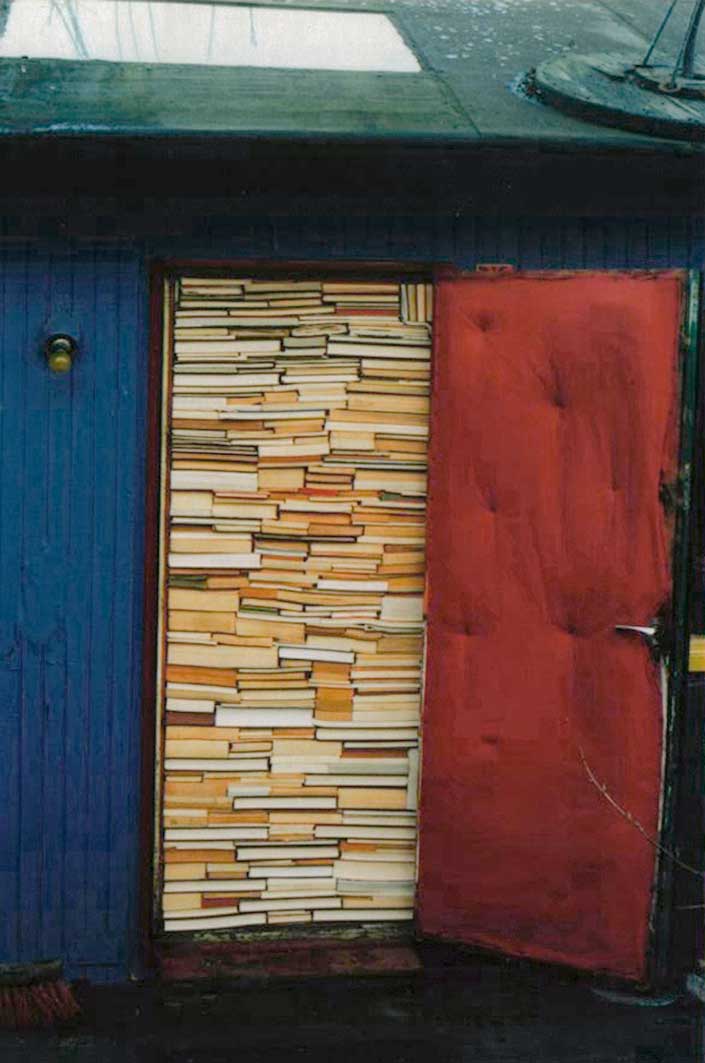 Once interest was sparked, there was no stopping her. Whether on the road or out and about on daily chores she found herself taking snapshots of doors. In the lead up to her final paper at the art academy, she found herself living in an apartment block in Amsterdam surrounded by neighbours. And everyone had the same door. It was even the same story across the street. It seemed so impersonal. 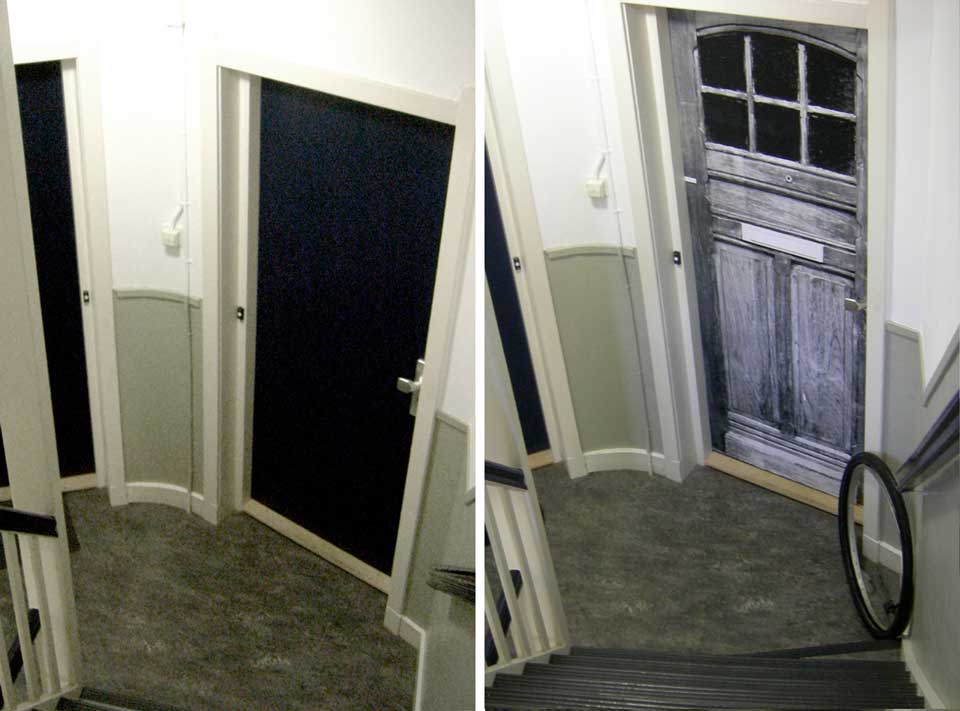 Marieke decided she wanted a door that fitted with the feeling that she had in her home. She began to talk with the neighbours about what she thought, they invited her in for tea/coffee, they liked the idea and joined in on the project. The project became Opplakdeuren (sticker doors), and inspired part of her final paper at the art academy in 2007. The neighbours became friends. Soon after graduation, Marieke tells me about Opplakdeuren. I’m a sucker for life’s poetry and love the idea straight away. I’m reminded of an old school project that involved taking pictures of pupils’ front doors. 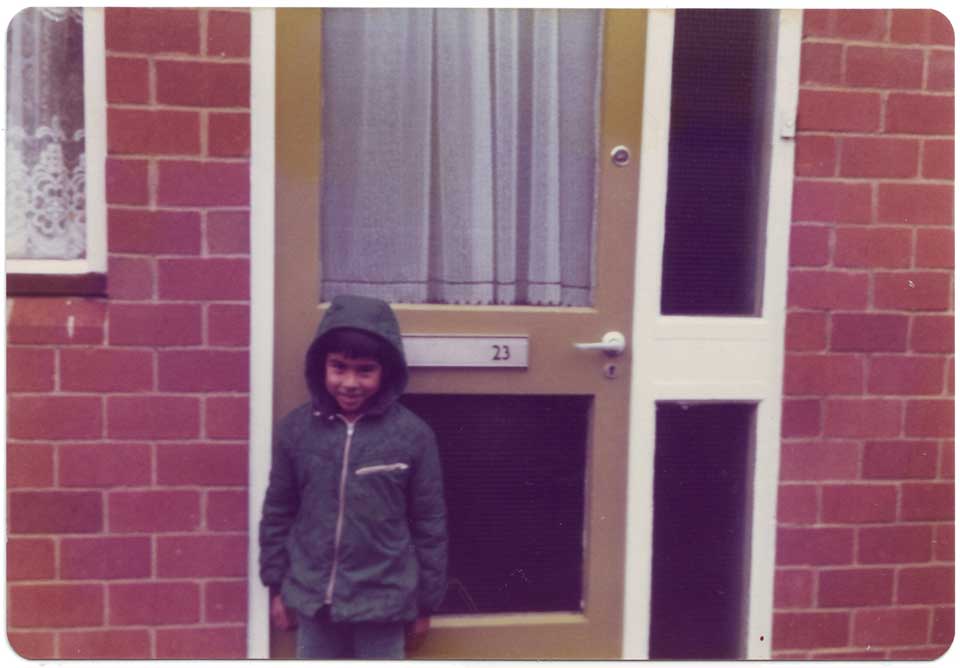 On a trip back to London, I even manage to dig out the picture of me from that school project. A picture with me shyly standing in front of the door to the home where I grew up. Where my parents still live. It evokes memories and feelings that I’d long forgotten. Memories of a period soon after we’d all returned from 18 months in Bangladesh getting to know ‘our roots’. It was a challenging time trying to feel at home again in inner city London, after the beautiful nature and lifestyle afforded us in Bangladesh. I get a dry throat writing about it now. A photo of a door, such a simple thing, yet such a big impact. 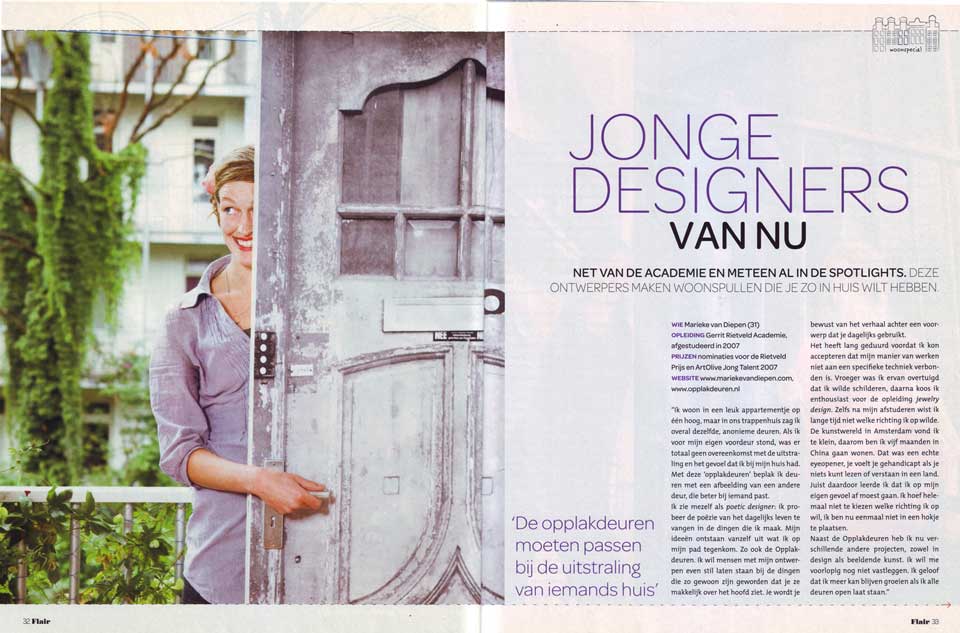 Opplakdeuren got some early media attention and stayed around as a hobby project. Marieke began collaborating with a multi-disciplinary network of people interested in exploring what it is to ‘feel at home’. 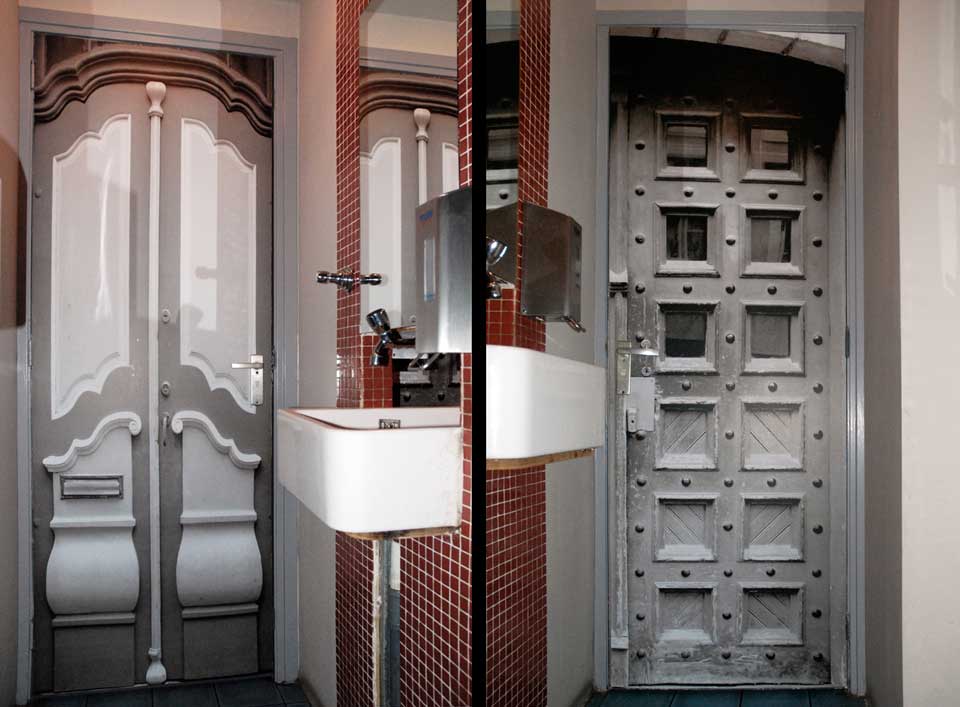 In 2009 a popular bar/restaurant in east Amsterdam ordered opplakdeuren for their washrooms, catalysing Marieke to innovate and find highly durable material. From then on there was an order to two a year, resulting in happy customers. At end of 2013, I have a mid-life crisis and decide to become a social entrepreneur. Marieke and I talk about making a book or documentary of a project at a care home where residents are able to pick doors and personalise their entrance and share life stories. We are excited by the prospect of exploring the subject of how people make their (last) home. Karl and Ana join the conversation. We had worked together previously, enjoyed those experiences and made good things happen in unlikely circumstances. Both are passionate and gifted at what they do. They’re also expats who have reflected as many expats do on what it is to feel at home. Both liked the idea of the project and saw the poetry, and so with the team together, True Doors was born. Yey! In spring 2014, we had the chance to try out our idea at a care home in Tilburg. The project went well and a few residents agreed to video interviews. It was lovely to see how they took pleasure from their True Doors. In conversation with Anja Meeuwesen, a care manager, we learnt that using a picture of a door where someone with early stage dementia felt at home to create their own personal True Door, could stimulate memory and help with orientation, making it easier for this group of people to find their rooms in new environments such as care homes. We imagined that they might even feel more at home. Inspired by the idea we began to work out how to bring it to fruition and get lucky when we connect with Marijn a recent post-graduate and researcher with people with dementia. Having worked out how to make personalised sticker True Doors and Marijn on board we began to approach care homes early summer using a person-centered care approach. I leave our story here for now. If you’d like to stay up-to-date on our unfolding adventure, subscribe to True Doors emails, we’ll be happy to let you know from time-to-time.
Follow Rahzeb Choudhury:

I am the founder of Lifelong Inspiration, of which True Doors is an ongoing initiative. In 2014 we began working on what seemed to be a one off social project. One thing has led to another and now I find myself as a member of a growing international team and projects completed in fifteen countries and counting. I take overall responsibility for our service, with a focus on growing our international presence. There are two doors where I’ve most felt at home. The first is the front door of my parents house where I grew up in London and second is the front door where my children are growing up in Amsterdam.

As World Alzheimer‘s Awareness Month 2018 comes to an end we wanted to draw attention...

Together with the Dutch Ministry of Health the team of the Zorginnovatiewinkel organized an Innovation...

If you are caring for a loved one with dementia reading blogs dedicated to Alzheimer’s...

Whether it’s a birthday party, family gathering, Mother’s Day or Christmas; celebrating with the people...

For me the essence of feeling at home is captured in these words by American...

I’m excited each time I cross the Malieveld in The Hague with my family for...

What is that actually, someone’s “identity”? There are so many factors involved, it’s difficult to...

Here in the Netherlands the MSD Care Award is given annually as seed funding to innovative...